What is jazz orchestra?

What is jazz orchestra?

When serving as the music director of the Reno Jazz Orchestra, I was occasionally asked what is the difference between a big band and jazz orchestra? My glib response was, “$50 a musician” (insert rimshot here). I guess it is time to come up with a better answer so my installment this month gives you the inside scoop on jazz orchestras.

I always thought that a big band was primarily a swing-era dance band and as bandleaders like Duke Ellington and Count Basie explored new sounds they moved from the dance hall to the concert hall and the jazz orchestra was born. It turns out jazz orchestras date back to the early jazz of the 1920s.

As most of you know, jazz has its roots in New Orleans Dixieland. Dixieland features three horns in front, one playing the melody and the others playing individual lines of their own choice. Think of the song When the Saints Come Marching Home. The trumpet playing the melody, the clarinet improvising behind the melody up above, and a trombone adding accents and support to the melody below; the piano, bass (often a tuba), and drums providing the framework. Many at the time felt that though jazz was a part of a growing dance craze, it was still rather crude and not to be taken as serious music That changed during the 1920s with Paul Whiteman’s Orchestra. Paul was a violist who began his career with the Denver Symphony Orchestra and then the San Francisco Symphony. After a stint in the Navy conducting a 40-piece Navy Band he formed the Paul Whiteman Orchestra. Dance bands of the day typically had six to ten musicians; his jazz orchestra would be as large as 35. By 1922, he had 28 ensembles on the east coast and was earning over $1,000,000 a year! His 1924 concert at the Aeolian Hall capped off by the performance of George Gershwin’s Rhapsody in Blue is considered the moment jazz evolved from folk music to an art form. Duke Ellington said, "Paul Whiteman was known as the King of Jazz, and no one as yet has come near carrying that title with more certainty and dignity.”

Whiteman felt that jazz could be improved with formal arrangements to replace the group improvisation of Dixieland. He was criticized at the time for trying to “make a lady out of jazz” but the stage had been set for generations of jazz orchestras.

Fletcher Henderson was another jazz orchestra trailblazer. Growing up in Georgia, his mother taught him to play piano and he became an accomplished pianist. However, he chose to study math and science at Atlanta University and moved to New York City to earn a master’s degree at Columbia University.  Because he was an African American, he was unable to find a job in chemistry.  His music career began when his apartment roommate, a pianist, was too sick to perform with the Riverboat Orchestra, so Fletcher took his place for the night.  This soon led to a full-time job with the orchestra and a job at Black Swan Records. In 1922 he formed his own band that soon became known as the best African American band in New York. Louis Armstrong joined his orchestra for a year in 1924 and Louis’ performances inspired him to develop richer orchestrations. He and his arranger Don Redman created the swing music “formula” and broke the orchestra into sections: saxophones, trombones, trumpets, and rhythm sections, which became the standard for big bands and jazz orchestras. His orchestra started the careers of such greats as Roy Eldridge, Coleman Hawkins and Benny Carter, and though famous in Harlem, he could not financially keep his orchestra going and was forced to sell many of his great arrangements.

Many great bandleaders over the years have followed Paul Whiteman’s and Fletcher Henderson’s lead of bringing new ideas and styles to the concert hall. Forward thinking and progressive. Duke Ellington introduced the sacred concerts in a church setting, original suites such as Such Sweet Thunder, a tribute to William Shakespeare. Count Basie elevated blues and infectious swing to new heights. Stan Kenton expanded the typical band to include mellophoniums, French horns, and tubas creating what was to be called, “the wall of sound.” Woody Herman started his big band featuring the blues and as jazz evolved, his sound evolved with it, well beyond swing to be-bop in the 1950s and rock and fusion in the 1980s.

My two favorite contemporary jazz orchestras are the Jazz at Lincoln Center Orchestra (JLCO) and the WDR Big Band. JLCO was founded in 1988 as a part of a summer concert series and became the resident orchestra in 1991 at Lincoln Center. Currently under the direction of Wynton Marsalis, the JLCO brings to life the many styles of concert jazz over the generations as well as having a robust education program including Essentially Ellington, a national competition for high school jazz bands. The WDR Big Band resides in Cologne, Germany, and produces concerts and CDs that cross musical borders. In a big band setting, you will hear the classic jazz of Duke Ellington, the South African pianist Abdullah Ibrahim, Bach Christmas Oratorios, and the American jazz fusion band Steps Ahead. Jazz Orchestras have flourished throughout the U.S. in recent years. Many cities have jazz orchestras: Columbus, Chicago, New Orleans, Denver, Cincinnati, Albuquerque, and Spokane just to name a few, and all have educational components to bring jazz to the next generation.

The Reno Jazz Orchestra is in a good company of jazz orchestras as we continue to bring progressive, forward-thinking jazz to our community. We are comprised of five saxophones, four trombones, four trumpets, guitar, piano, bass, and drums. If you have seen us, you know we also add singers, added percussion, and guest artists.

So, when someone asks, “what is the difference between a big band and a jazz orchestra,” you can tell them! 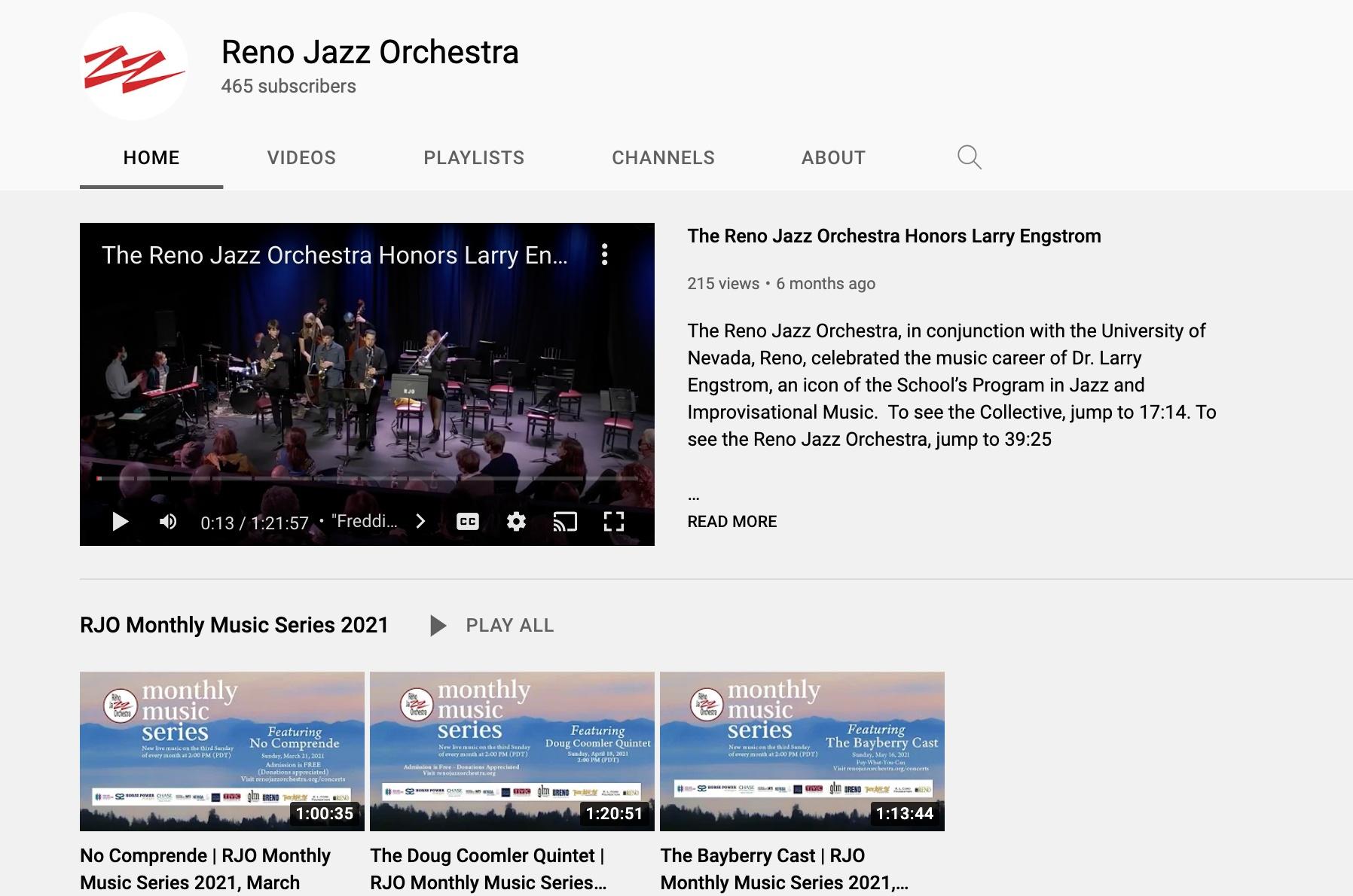